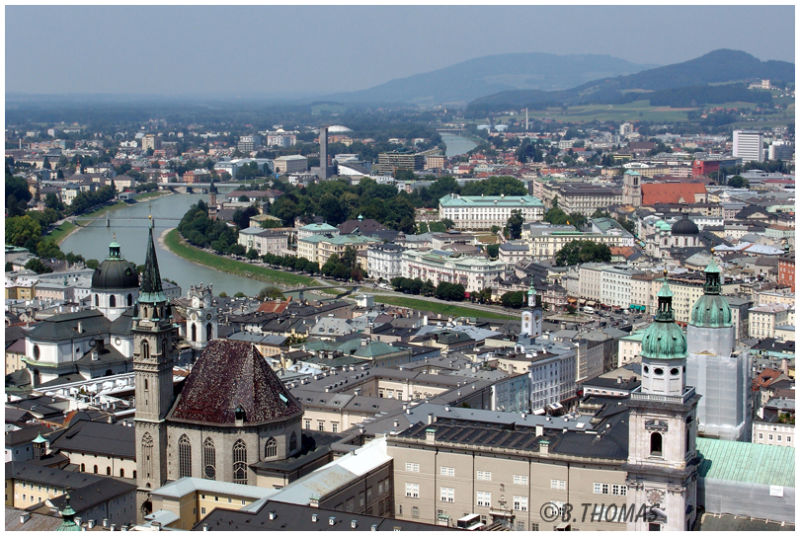 Posted by B. Thomas (Arlington, Texas, United States) on 5 July 2009 in Cityscape & Urban and Portfolio.

Salzburg is the fourth-largest city in Austria. Salzburg's "Old Town" with its world famous baroque architecture is one of the best-preserved city centers north of the Alps, and was listed as a UNESCO World Heritage Site in 1997. This beautiful city is noted for its Alpine setting. It is also the birthplace of Wolfgang Amadeus Mozart.

I think everyone who has been to Salzburg as a tourist has a shot from the fortress looking down toward the Salzach River. Who could resist??

Lovely shot! I was there 20 yrs ago in homage to the Sound of Music which of course was filmed there. Happy Days, greatr shot!

@MrsAmber: Right. Be sure to check tomorrow because I think you will know the shot and like the story. ;-) Glad you like it.

Wonderful photograph and a spectacular city! Thanks for the history also!

@Scott Schilling: Thanks. It really is a beautiful place.

What a spectacular shot. Well done, you!!

@Sarah: Thanks so much, Sarah. I appreciate it.

@john4jack: Thanks, Jack. There is some knock-your-socks-off gorgeous architecture there.

By your comment and image, I see you and the tourists are one. And if I were there beside you with my camera, I'd be doing the tourist thing, too. Great image, BT.

Stunning view! It may be a common angle but first I have ever seen it, your image inspires me to go there. Excellent capture.

@Barbara: Thanks, Barbara. I hope you make it there and post your version of the view. ;-)

"And the river rain through it"......very nice shot of a very nice looking city.

@Lambspun: Thanks. I should have used that for the title.

Marvelous capture...you surely had a great trip....really like the scene here...lovely details on the houses and buildings