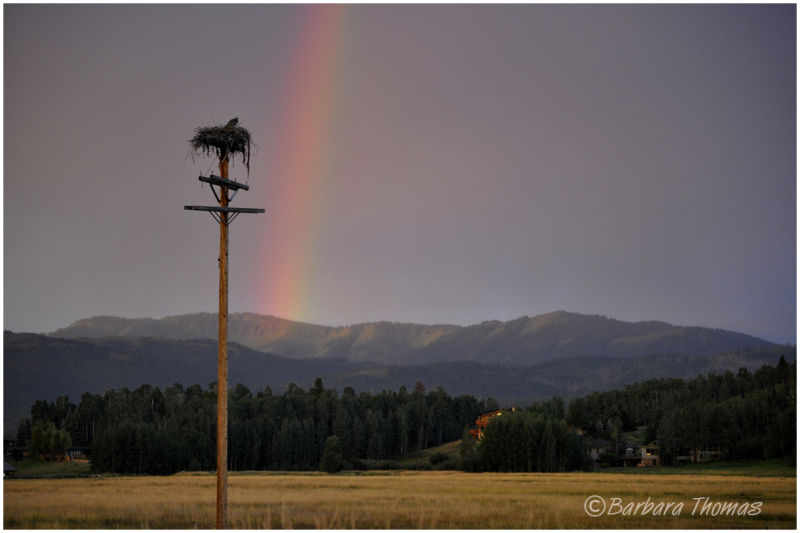 Posted by B. Thomas (Arlington, Texas, United States) on 5 September 2011 in Landscape & Rural.

On the first morning of our trip we got up early and headed into Jackson Hole from Teton Village. After leaving the Texas heat and drought, we were happy to drive through a little rain shower.

Just as a rainbow appeared we happened to pass a pole with an osprey nest, and there was even an osprey in the nest. Of course it was one of those "stop the car!" moments, of which there would be many more.

Well captured, and lucky to find bird at home kind of shot.

I guess this it what it means when they say "all the elements came together". Nice find.

Lovely when a Moment like this suddenly presents itself from nowhere . . you could not repeat this in a million years !

Excellent composition... The bird was a fantastic addition here ! Have a lovely day Barbara :)

Oh yes! It doesn't get much better than this - super combo - a "two-fer" (rainbow & osprey together).

I would say so....I'd probably jump out while it was still moving...LOL! Amazing find!! And I do think I see a glow from a pot of gold in those mountains! ;)

@Judy aka L@dybug: LOL, Mike said to tell you that of course he stopped - it was too early in the trip to die! ;-)

A great shot ! Today I was so happy, because I have seen a flying osprey with a fish !

@Loner: That's great. We saw them a lot while we were there, and saw them flying up and down the river, but never did get to see one with a fish.

it pays to have the camera ready! a very attractive snapshot, with many "lucky" elements coming together!

A stunning and very serendipitous composition Barbara! I see your road trips are much like ours!! ;-))

@Eric Cousineau: Yes, you know about those "stop the car" moments too, don't you?!

Beautiful Barbara! Those Osprey nests are amazing aren't they! The rainbow's the icing on the cake. :-)

@Jason Politte: Thanks, Jason. They are so much fun to watch, especially when they are fishing.

Gosh that's fun -- and that they choose telephone poles to make nests in. There is a next on a pole near us that I have stopped for many times, but never such a lucky double wammy luck out picture as this.

@Twojays: They build platforms on top to keep the birds out of the wires. Cool, huh?

What a great start!!! Glad he stopped

Barbara I am so sorry for not answering your message the other day about your "Yellowstone moment"..Haven't been well lately...I appreciate you thinking of me - that was really super nice of you to do that...I am sure you noticed the shot was a "Totally Tourist Don't Even have to get out of the Car" kind of pov!!...But that's the beauty of Yellowstone...Thanks again! .......Now, this one is really cool I think. We get a lot of bang for the emotional buck with the rainbow AND the osprey!! How cool is that...Great Catch Barbara...glad you survived all the fun and frivality up there...that had to be fun...Now you are back and I am hearing about some blasted fire down by Houston ??? maybe over by Cypress or Tomball or further over in or east tex or somewhere down there?? I have no clue...Getting sketchy details but I was calling a company in Houston and the lady that I was trying to contact was home because of a fire nearby...How much worse can this get..Take care you two!!

@Denny Jump Photo: Thanks, Denny, and also for your email today. I just thought it was funny that I recognized that place and since you posted it just a few days before we left - I had not even thought to look for it, and there it was. I really should have gotten a shot. Yes, the trip was wonderful. It was so nice to get away from the heat! Yes, there are some bad fires again in Texas. I was planning a "girl trip" with friends to Bastrop (near Austin) for Nov. and the place we were going is toast! We are going to have somewhere else to go. There are also fires near Possum Kingdom Lake again. What a mess. We really need some rain, but at least it's a little cooler now.

PS - How 'Bout them Baylor Bears!! (I hope this doesn't tick you off ;-)) Sister in law went to Baylor and Dearly Departed Dddy in Law was born in Lott, and family all lived arounf Waco....I've been a Baylor fan since the early 70's..not much to cheer about tho....

@Denny Jump Photo: Are you kiddin'?! We were thrilled. This is a huge TCU fan area, but Mike (hubby) is a Baylor Bear and his brother is an Aggie, so it was nice to see the Bears do well!

You could NOT have planned this if you waited a thousand years, Barbara. What an extraordinary find! Great catch.

Great shot..what a nice combination..wild bird nest in a pole... background is awesome and a rainbow..all is there superb...

@Denny Jump Photo: He went to Sam Houston State a year or so,'65, and graduated from Baylor about '69 I think. Maybe their paths crossed back then. ;-)