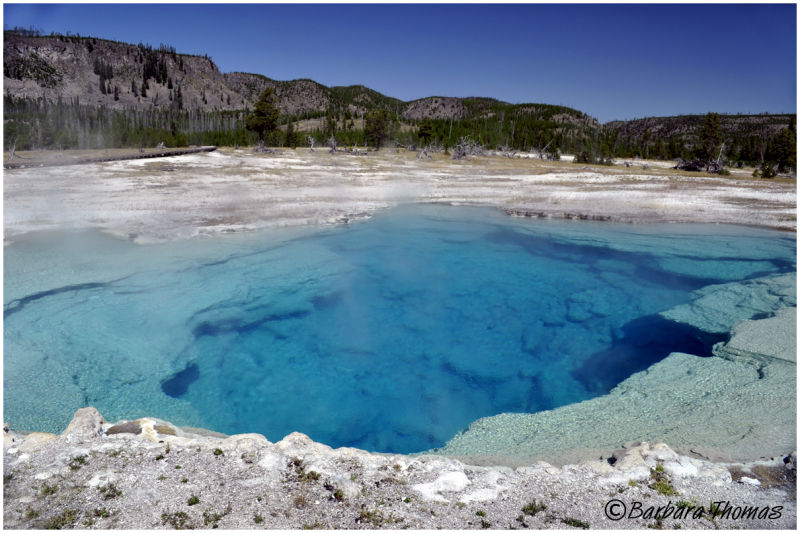 Posted by B. Thomas (Arlington, Texas, United States) on 14 September 2011 in Landscape & Rural and Portfolio.

Sapphire Pool in Biscuit Basin, Yellowstone
Temperature 200-202°F Dimensions 18x30 feet. Sapphire Pool, named for its blue, crystal-clear water and for its resemblance to an Oriental sapphire, was once a placid hot pool. It was not until after the 1959 earthquake that major eruptions occurred. For several years following the earthquake powerful eruptions at two hour intervals reached 150 feet. The force of the eruptions caused the crater to double in size, destroying the biscuit-like formations around its edge, and the crystal-clear water became murky. By 1968 Sapphire ceased to function as a true geyser. Today Sapphire still retains its crystal-clear, blue water, and still violently boils and surges occasionally.

With other words...when the Earth breathes, the pool surges to life! It must be so because only the Blue Planet can breathe blue!And....at such a temperature!!!!

Of incredible beauty, the water clarity is amazing. Splendid image and thank you for the explanation that accompanies it. Good day.

Isn't this a fantastic natural phenomenon? Yellowstone is amazing! Another place I need to get back to.

Laurent from not far from Lyon, France

A beautiful shot of one of natures wonders with an enlightening explanation. Thanks.

Wow! Such beautiful blue water, such amazing clarity! Thanks for the history, too- it makes the photo that much more special!

I can smell the sulfur now! Fine capture of the marvelous color of this pool. Excellent image.

Stunning composition with beautiful colors captured here! What an intriguing find. I need to make my way out to Yellowstone soon.

This water looks so unreal – an amusing scenery photo !

where is my swimming trunks ???

This is the best shot I have seen of this pool ever! Bar none! Great job, Barbara! Thasnk for this...we missed it when we were there!

OMG this is amazing
great shot
5*

What a dream place !

That is amazing. Beautiful shot, Barbara, and thanks for the history to go along with it. I'll bet it is really wonderful to see in person.

A great picture. These pools are extremely hard to capture as there are a ton of folks nearby and their size. The explanation is great too. The bluer the water, the hotter the temp..this is a HOT blue!

My favorite shade of blue, but the heat in these pools scares me to death. This is a fantastic image.

Gorgeous color. One of my most favorite places!

Barbara....I have never seen anything like THIS before! Pretty amazing stuff! I just can't believe the beautiful blue color. Where exactly does the blue come from? The temperature of the water? The rock? Awesome shot?

superb colour tone and great calrity of the water in the pool! you captured this scene very nicely - i also like the good DOF to keep the detail all around the pool sharp and clear!

The color is very tempting to jump right in, but being boiled is off putting :0 Fantastic Blue color.

sorry, going backwards here... this is too cool...looks wicked hot!