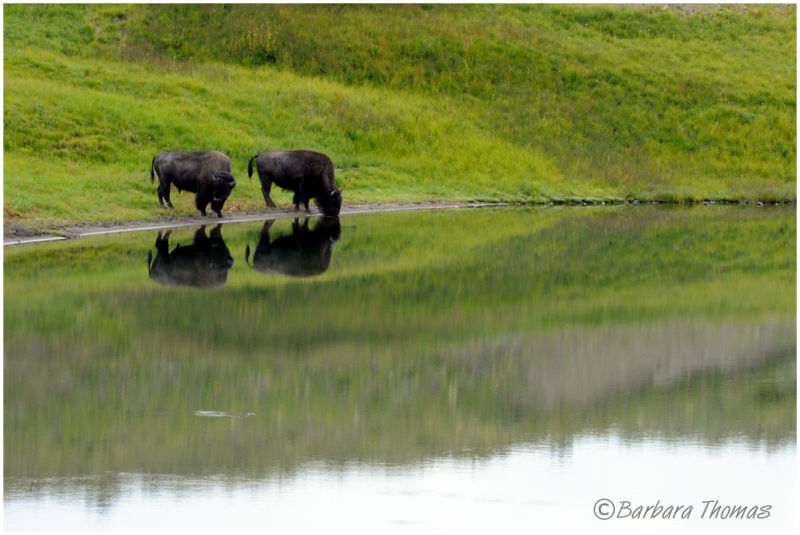 Posted by B. Thomas (Arlington, Texas, United States) on 17 September 2011 in Animal & Insect.

The American bison also commonly known as the buffalo, is a North American species of bison that once roamed the grasslands of North America in massive herds. Due to commercial hunting and slaughter in the 19th century, the bison nearly went extinct and is today restricted to a few national parks and other reserves.

Beautiful what God has created

This is so good! You make wonderful nature pictures Barbara! Keep up the good work. Bravo.

What a chance you had!!! This is amazing!

A wonderful image Barbara! You must get up to Edmonton and see Elk Island National Park which is located about 30 miles east of the city.

Originally founded in 1906 as a wildlife refuge for preservation of the elk herds in the area, Elk Island National Park has grown to be a wildlife sanctuary for bison, moose, elk, white tail and mule deer, beaver, porcupine, Canadian lynx and other small animals. It is home and migratory stopover to 250 species of birds, including pelicans, great blue herons, a large assortment of ducks, and birds of prey … bald eagles, great horned owls and osprey.

Elk Island National Park has been the most influential organization in re-establishing bison in not only Western Canada and the United States, but has contributed to growing bison herds all over the world. ;-)

@Eric Cousineau: I have read about Elk Island NP and would love to go there, Eric. I think some of the Yellowstone bison were from there. It sounds like a great place for photographers.

Love to see them in images of peace and plenty. Lovely frame Barbara.

@franz: The Quanah Parker story is a big part of Texas history. In that case "progress" was not such a good thing. There is a town in west Texas - Quanah named after Quanah Parker.

a great shot and a nice compo !

Composition is grand...reflection is great...How does it get any better? You got up early to see this too. Good job!

wonderful color and clarity. i especially like the tone and mood: quiet, serene, and reflective :)