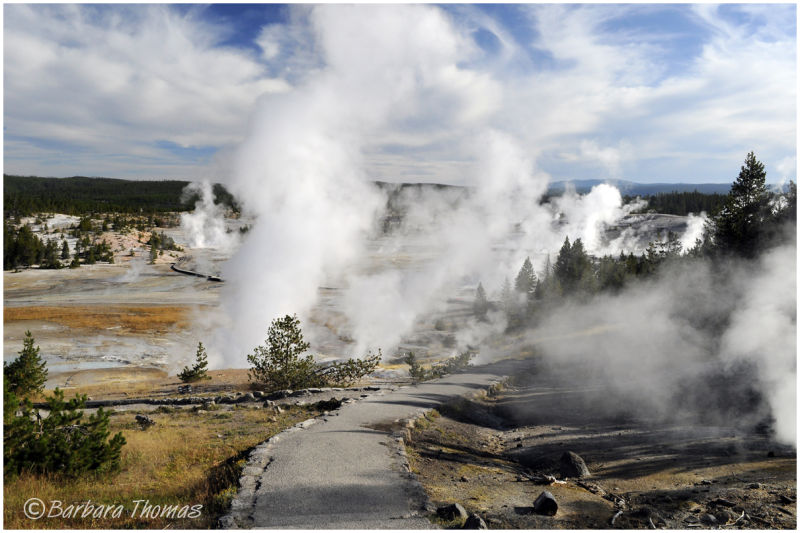 Posted by B. Thomas (Arlington, Texas, United States) on 21 September 2011 in Landscape & Rural.

John Colter, a member of the Lewis and Clark Expedition, was the first to see the geysers near Cody, Wyoming in 1807-1808. Later Old Faithful and the boiling mud holes of what is now known as Yellowstone Park was nicknamed Colter's Hell because no one back in St. Louis would believe him when he described the boiling water, mud and steam.

*The notion that Colter's Hell referred to one of the geyser basins of Yellowstone first appeared in Hiram M. Chittenden's 1895 book Yellowstone National Park. However, Chittenden went on to describe a "tar spring" on the Stinkingwater as well under the same name. Chittenden's speculation contradicts the earliest published description of the site in Washington Irving's account of Captain Benjamin L.E. Bonneville's journals of Bonneville's scouts' visit to the location in 1833, the same year that another of Bonneville's survey parties discovered the geyser basins of Yellowstone along the Firehole River.

The sights, sounds, and smells of a morning in the Norris Geyser Basin could easily make one wonder if they were indeed about to enter a path into hell. I actually found my walk there to be rather heavenly.

BEAUTIFUL I would love to be there.

A very beautiful hell indeed. I like the path leading down into it. Very interesting history as well.

A wonderfully dramatic image Barbara! Great details to go with the image! ;-)

Good afternoon Mrs. Thomas,
An interesting spectacle of nature. In the photo captured fantastic. Thank you for this information.
I wish you all the best and health. Dear greetings from Christel and Ranger......

A wonderful capture of this amazing steam-filled place. A great shot!

This is truly an amazing and magnificent scene, Barbara...excellent job here! There is also the old saying (and song) about the road to hell being paved with good intentions...but I think the misuse of the word "hell" began with the early story writers who loved to embellish things just a wee bit...sounds alot like we have them still around if you watch any newscast or read any tabloid....You vision and image here is what it's al about - beauty, amazement, nature and all of it's activities..Fantastic, Barbara...As a Post Script, I might add that, after walking through the sulphur and steam-laden geysers of Yellowstone, to this day, my nose is still over sensitive to cooking odors and grease.....can't seem to get it out of my olfactory system ... But I'm ready to go back ;-)

OOOh what a great frame Barbara. Cloud and steam merge. The thermals are so elementally primitive, so unchanged sort of, we feel. Such pungent moisture and power. Beautiful too. That looks like Norris.

@Twojays: Thanks, yes it is Norris.

Marvellous image, to some it must seem apocalyptic.

DESPITE STRAIGHT LINES from United Kingdom

That's a stuning frame and the pathway leading the eyes in works so well in this composition.

@DESPITE STRAIGHT LINES: Thanks!

how anyone can compare this magnificent natural spectacle to hell is beyond me! hell is much rather to be found in today's megacities or giant slums, i'd say ...
(and even the smell of sulphur has no link to hell for me - baden, my hometown, has numerous sulphur springs that have been used for curing rheumatism since roman times! when there is low pressure, the whole town reeks of it ... not hell, surely!)

@franz: I agree. I guess back when the 1800's the descriptions sounded pretty far fetched.

The sulphur odor is really unpleasant only if one associates it with rotting eggs. When you adjust your thinking, and realize what is going on beneath your feet you are reminded at how minuscule you are. The beauty in this park has to be seen, felt and smelled to comprehend it. Your image is the next best thing!

@Judy aka L@dybug: Thanks, Judy. I thought all the smells were just part of the fun of the place. ;-) What is going on beneath the surface is really amazing.

Thanks for the history, Barbara. This shot is amazing! Was the temperature different walking along the path because of the warm steam?

@Sandy Weston: If the steam blew on us, it was warm or even hot, but it was a beautiful cool morning so the steam did not warm the whole basin.

Impressive sight! The steam and the clouds look connected here :)

Barbara..the sky with the clouds and the smoke are wonderful...Definitely not “hell” but back in the 1890s it was a good way to describe something that no one really believed existed. Great capture