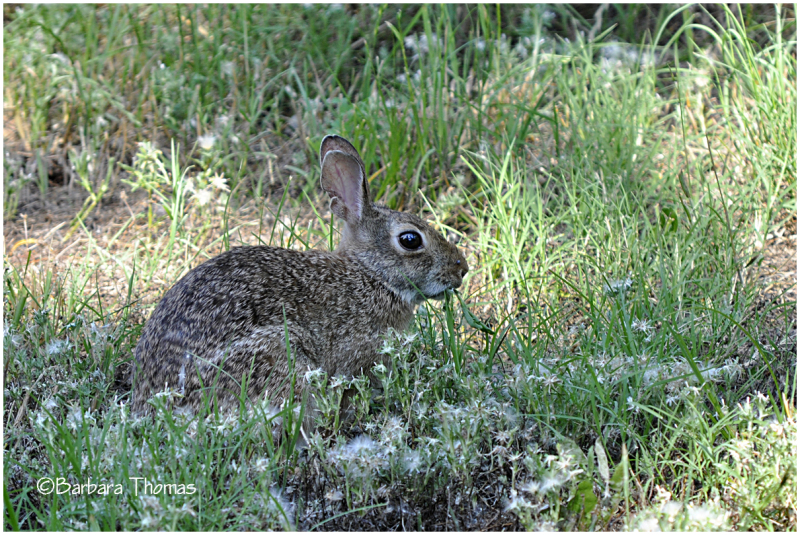 Fox series
OK, I know I said this is a fox series, and I also know this is a rabbit. (It's not even Silly Tuesday.) I posted it with the fox series, because the fox in the next three shots was about 16 feet away from this bunny, and didn't seem at all interested in him.

We have seen foxes chase rabbits without any luck at catching one, but mostly they just ignore each other. I guess the foxes prefer the yard buffet that requires no effort.

Nice closeup of the bunny.

Awww... So sweet ! I love his attitude ! Have a lovely weekend Barbara :)

Nice highlight in the eye.

We have rabbits in our yard and fields also, but I haven't been able to get a picture. We have dogs, so the rabbits are very shy.

@Donna: The dogs around us are in fenced yards, and the rabbits like out nice green grass. I think they feel safer up near the house than out in the field at night.

This is soft and lovely color palette. I was watching some deer walk by yesterday, and noticed a bunny sitting as they do sorta hunched and curled, and almost camouflaged on the gravel and weed surface outside. I like bunnies.

A fine close up of this rabbit who appears very much at ease. I haven't seen any around here in the last year or two. I'm sure they are still here, but I haven't spotted one to shoot.

So nice and sweet !

A lovely sharp shot. Here, like foxes, they've been introduced and have done untold damage to agriculture and native habitat - but they're very attractive when they're elsewhere! :)

@Bron: I can understand that. Here in the city I think the worst the rabbits do is nibble on our flowers and potted plants. ;-)

LOL, I thought oh no, foxes and bunnies - but see the foxes really ARE clever since they've trained some nice humans to offer them buffet lunches!

@Wendy: Trained is right. They know if they sit there and look cute, we will be out with a snack. We do see a bunny tail flash sometimes with a fox in pursuit but seems like the rabbit gets away.

I'm happy to see that your foxes pay little attention to the rabbits; I thought our might be strange. How bless you are to have the wildlife so close to you!

@Judy aka L@dybug: I agree!

That is funny to hear, Barbara. I didn't think the foxes could ignore their nature to hunt.

If the foxes don't go after the rabbits, what about the coyotes?

@Julie L. Brown: We have not seen a coyote back there since early April. I think when there is plenty of food in the spring and summer, the coyotes go deeper in the brush and creek areas, and do not come as often near houses. They would get the rabbits for sure, and maybe get the foxes too.

@StarCosmosBleu: From what I've been reading, they will eat just about anything they can catch, and also like fruit and nuts. I think they mostly catch small mice, voles, and shrews.

Very nice image. I find surprising the fox attitude towards the rabbits.

@Francisco Romero: Me too, but maybe it's just because we feed them. They may catch them at night when we don't see them. There always seem to be more rabbits, and maybe they keep the population in check.