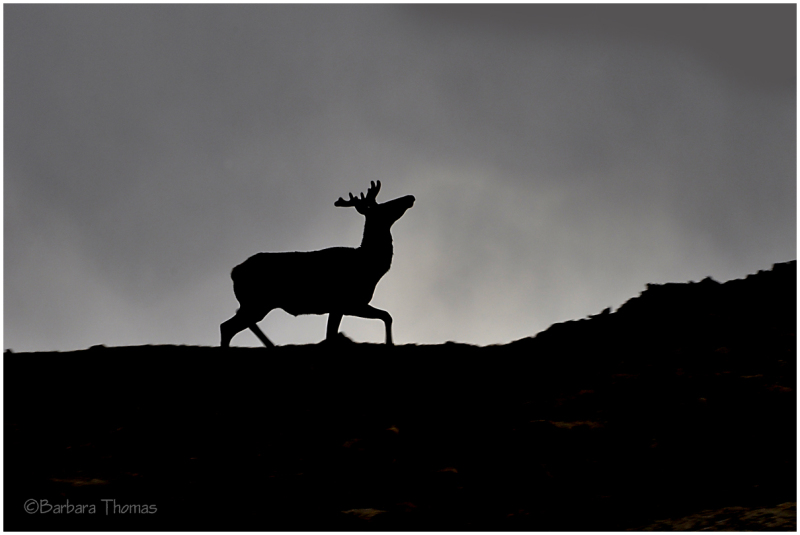 Posted by B. Thomas (Arlington, Texas, United States) on 11 July 2012 in Animal & Insect and Portfolio.

A young male prances as he nears a herd of female elk.

Elk have played an important role in the cultural history of a number of peoples. Pictograms and petroglyphs of elk were carved into cliffs thousands of years ago by the Anasazi of the southwestern U.S.

More recent Native American tribes, including the Kootenai, Cree, Blackfeet, Ojibwa and Pawnee, produced blankets and robes from elk hides. The elk was of particular importance to the Lakota, and played a spiritual role in their society. At birth, Lakota males were given an elk's tooth to promote a long life. Young Lakota males who had dreamed of elk would have an image of the mythical representation of the elk on their "courting coats" as a sign of sexual prowess.

The Lakota believed that the mythical or spiritual elk, not the physical one, was the teacher of men and the embodiment of strength, sexual prowess and courage.

Oh wow! This is beautiful. Wonderful light and silhouettes

I like this Barbara, its different and yet so typical of the way an elk will prance.

Wonderful contrasts and B and W !

@Basile Pesso: Thanks. It is actually a color shot, with a very heavy and overcast gray sky but it does look B&W.

Majestic silhouette - this is magnificent, Barbara!

A great silhouette. I like his apparent "prance" as he moves along.

WOW! I love this image. Such a perfect silhouette.

Stunning silhouette that you've captured of this elk!

Good job on this silhouette. Your wildlife stuff is cool. You need to do a picture story book:)

Beautiful silhouette! I like the tones of the sky!

This would be my lifetime shot - it's a spotlight image, or should be. This is great!

@Viewfinder: Thanks Glenn!! You must be psychic. ;-) It made it to Spotlight.

a beautiful and perfect shot

Congrats for the spotlight !

Excellent
Wonderful B and W

Congrats on the Spotlight - I feel you deserve it for the whole series, really !

@Ronnie 2¢: Thanks so much, Ronnie. I appreciate it, especially after all of the grief I give you. LOL!

This is fantastic, Barbara! I really love it, and how you caught his posture with that elegant lighting. Wonderful in b/w!

And, Congratulations on the Spotlight! Well deserved!

Back to congratulate you on your Spotlight!

Congratulation on the Spotlight !!!

Congrats - not surprised at all to see this as a Spotlight. Well done!

Congratulations on the Spotlight!
Well deserved!

Gorgeous silhouette! Congratulations on the Spotlight!

Congrats on your Spotlight, Barbara!

Beautiful! Congratulations on the Spotlight!

Congratulations on the spotlight!

Excellent capture! Congratulation on the Spotlight.

This is stunning Barbara, congratulations on the spotlight

Congrats for the spotlight

nicely captured ... congrats for your spotlight...

This is beautiful, Barbara, and I'm sad I missed this when it was first posted. It deserves its Spotlight!

@Judy aka L@dybug: Thanks, Judy.

Congratulations on the spotlight. Richly deserved. :)

brilliant silhouette and perfect for the spotlight! belated congrats, barbara!

So majestic. So proud. Bless her. And you, for getting this one for all of us to see.

This image has been featured in 2 Remix collections.