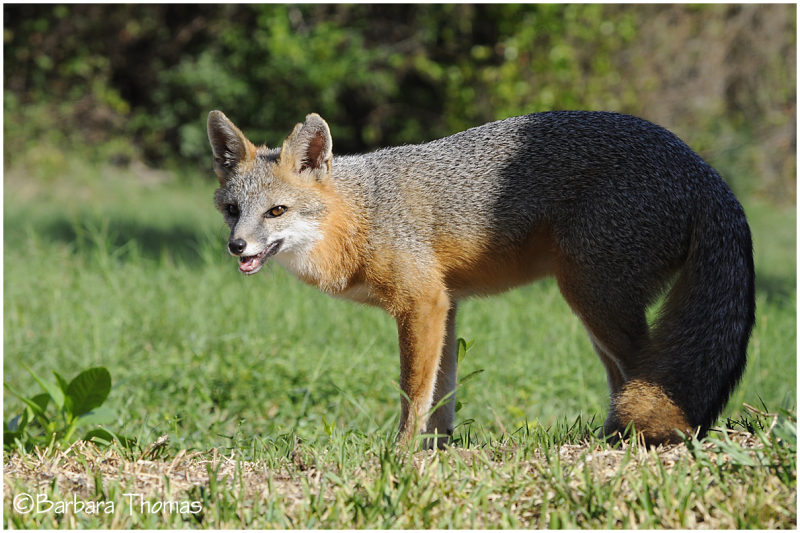 Posted by B. Thomas (Arlington, Texas, United States) on 11 December 2013 in Animal & Insect and Portfolio.

Nacho, the daddy fox, standing half in and half out of the sun.

*Fox series
During the heat and drought in the summer of 2011, some gray foxes started coming to our yard from the nearby field and woods for water after dark. They were so skinny and stressed that we started to feed them some to help them through the hard time.
Now almost 3 years later, they are doing well, and still drop by for a drink or bite to eat many nights.

He looks so handsome with that beautiful bushy tail, a lovely image Barbara

Beautiful moment - and very symbolic of the foxes emerging from the woods to enter your yard.

Excellent. he looks in good shape

Someone has nibbled on his little fox ears:) Beautiful critters

This sweet fox looks pretty well fed! I think you spoil him very much! Greetings from Tirol by Sonja !

Dad looks like he has everything under control here Barbara! Nicely captured! ;-)

so relaxed and at ease with his photo being taken.

A beautiful image - the other night when were were on out nearly home, two red foxes darted out near the canal. I thought of you

beautiful captured fox!! As he walks into the yard ... you do not have to worry about your pets .... after all it is a predator ..?

@Frankiess: No problem so far. The foxes and my cats are not interested in each other. Only a predator if you are a mouse. ;-)

curieuzeneuzemosterdpot from somewhere between viewer and subject, Belgium

Beautiful clarity in this shot, particularly in the fox's coat.

Another wonderful capture of these beautiful creatures, Barbara! 5*

Excellent capture of a wild fox. I wonder if the fox would be a female? It seems to have a gentle look somewhat. It's nice that you started to feed and help them. Have a nice day. :)

This image has been featured in 2 Remix collections.

All creatures great or small... by Judy aka L@dybug