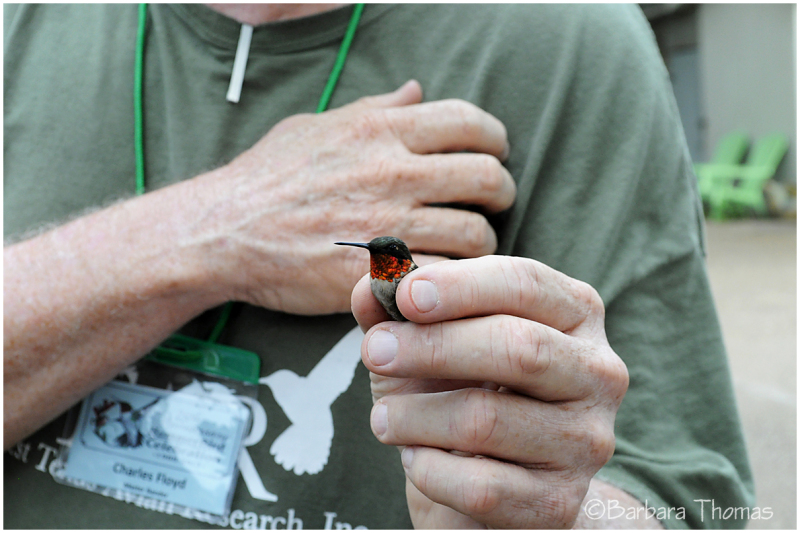 Humming bird banding is a valuable process in the study of the movement, survival and behavior of birds. The banding of hummingbirds is a carefully regulated process that must be performed only by trained and licensed banders.

The federal Bird Banding Laboratory (BBL) is administered by the United States Geological Survey, with a similar program operated by the Canadian Wildlife Service.

A 2011 video of the process that I found on youtube: http://www.youtube.com/watch?v=3rEEUVEXG0g

It is so small that I did not dare to take it in my hand.

What a tiny bird he looks !! And he beats his wings so many times per second!! Amazing B!!
Thank you for the lovely shot and the write up B:)

what marvelous scale this gives

Kawaii, so tiny how do you catch one:)

@J.R.: A special trap that is over a feeder. They just go right in feeding.

Beautiful detail in this shot Barbara! I would imagine that you would need a very soft touch to do this! ;-)

Beautiful shot, Barbara ... and how on earth do they catch them for the banding?

@Judy aka L@dybug: They have a special trap at a feeder. The hummers go right on feeding and don't seem to notice.

wow ! what a little bird

Oh how precious - you have really captured how tiny they are!!!

Awesome!....I did some banding once for waders but these guys look so delicate.

A beautiful little bird that one would never suspect can be quite aggressive around the feeder.

They are so small and lovely..did not know they were sometimes banded.