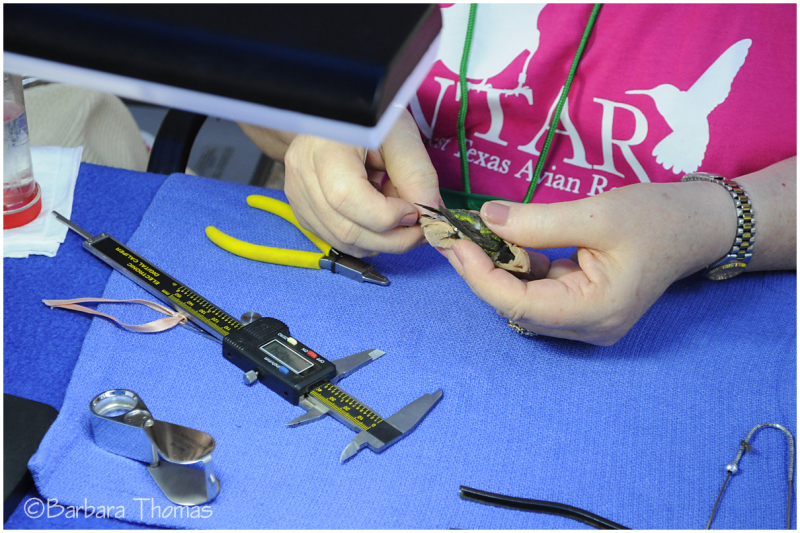 A trained and licensed bander works with a humming bird.

When banded birds are captured, released alive and reported from somewhere else, researchers can monitor the movements of an individual bird. Once carefully extracted from the trap, each bird is transferred to a soft mesh holding cage and checked to see if it has previously been banded.

Each "new" (unbanded) bird receives a band marked with a unique number which will be recorded in the BBL database.

A 2011 video of the process that I found on youtube:
http://www.youtube.com/watch?v=3rEEUVEXG0g

A delicate and impressive procedure !!

For some reason, I cannot play the clip but imagine how gentle it all has to be.

Super, they are soooooooooo tiny:)

Labor of love that tells us about the habits of animals and help us to protect them!

Another wonderful shot of this intricate procedure, Barbara.
Thanks for yesterday's explanation of how they are 'caught' for the banding.
What gentle hands these banders must have.

It takes a deft and delicate touch to complete this task! Nicely captured Barbara! ;-)

she must have exceptionally tender and gentle hands ...

A fascinating shot of this delicate process.

This is fantastic to see, and learn about. Thanks for yesterday's and today's great photos to go along with your narrative.