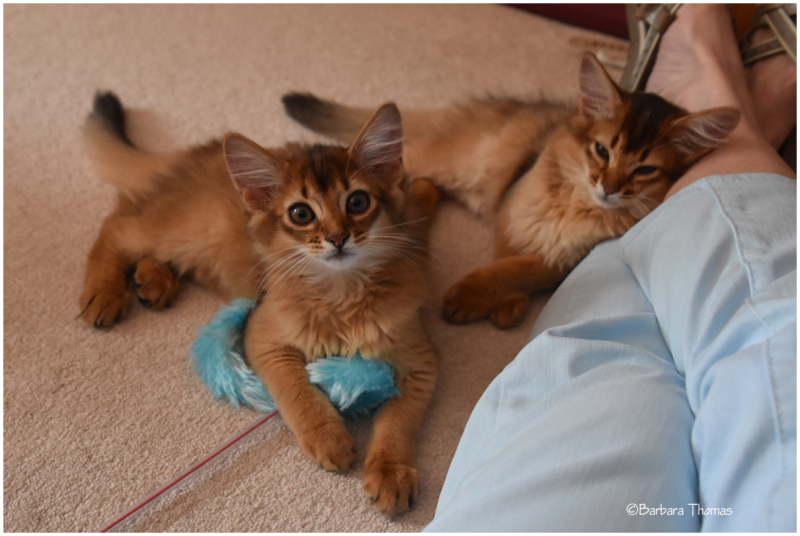 Posted by B. Thomas (Arlington, Texas, United States) on 1 September 2016 in Animal & Insect and Portfolio.

We traveled to Colorado a couple of weeks ago on a special mission. We were going to pick up a Somali kitten from the breeder near Denver. We had been waiting for about 11 weeks for him to be old enough, and I was counting the days. She had been sending photos each week, and each week I picked from the photos the one I thought I wanted.

We met the whole litter of six just over a week ago and we were choosing from two boys. We had already chosen his name - Nikon. The problem was, we could not decide between the two. We left and went up to Rocky Mountain National Park for a few days of hiking before coming back to pick him up. We realized that at first we were saying, "When we get him home..." but later we found ourselves saying, "When we get them home..." and then we knew that we really wanted them both. After a day and a half of traveling, they are now at home with us in Texas.

A beautiful image of these wonderful cats.

Oh how unique they are! What fun you are having! And future posts the cats' meow. Ghad corny.

As I said on FB, they are so precious. their color is so rich. ANd those eyes are irresistible

I can see why you had to take them both. Two bundles of love and fun.

They are adorable and so beautiful!

Aw!! They are cute..Lovely cute bundles :0) May you have a great time with them...
Wonder if Nacho will be jealous !

Lovely two puppies, and how large are their eyes, and so bright.:-))))Haleja.

Nice days to all of you my good friend.

Oh, my, what an overwhelming delight . . I am sooo envious !!

@Ronnie 2¢: I thought you'd want to see them, Ronnie. I will be sharing more!