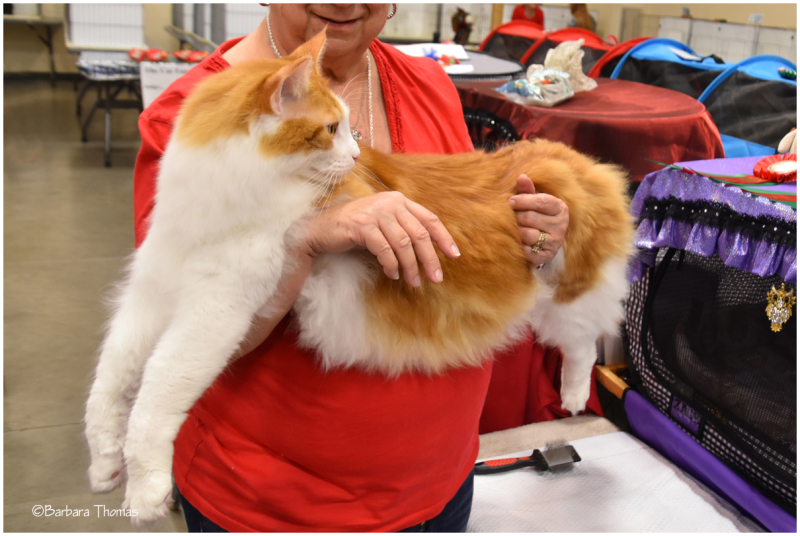 At a cat show in Cleburne, Texas a few weeks ago, this Maine Coon is carried by his owner to the judging ring. I don't think his name is "Tiny".

The Maine Coon Cat is the native American long-haired cat and was first recognized as a specific breed in Maine where it was named the official cat of the state. These cats were held in high regard by the locals for their mousing talents and special competitions were even held to reward the best “Coon Cat.”

Maine Coon Cats are intelligent, trainable, described as “dog like”. They will offer you hours of enjoyment with their antics but can at times be intrusive. Without question they want to be part of everything and your privacy may require a closed door between you and your cat. Most Maine Coon Cats have a fondness of water, to be in it, watch it, wash their food in it, or just plain play in it, so don’t be surprised if you have an uninvited guest in your shower or help washing the dishes on any given day.~CFA website

Ooh, he is gorgeous! What a big beautiful cat...

Just beautiful. I once had one of these cats, and I still miss her, she was a great companion, and could always be bringing a mouse in. Excellent image.

Actually, only Levi after the house, I noticed how captivating personalities of cats can be. The actual figure is based on the cat to tell a very interesting acquaintance. And moreover, very handsome.

A beautiful cat, I love cats, I would like to Leevi a friend, but has not yet received support for the idea of JP. But maybe sometimes ;-)))) Haleja.

Cat chy :) You doc background is excellent too

A gorgeous and huge cat. Fine close up of this beauty.

Except for the water part, the description sounds just like a poodle. Especially, the wanting to know about and be involved in everything.

Wow !! He is very beautiful.

That's a lot of cat, a beauty I may add.