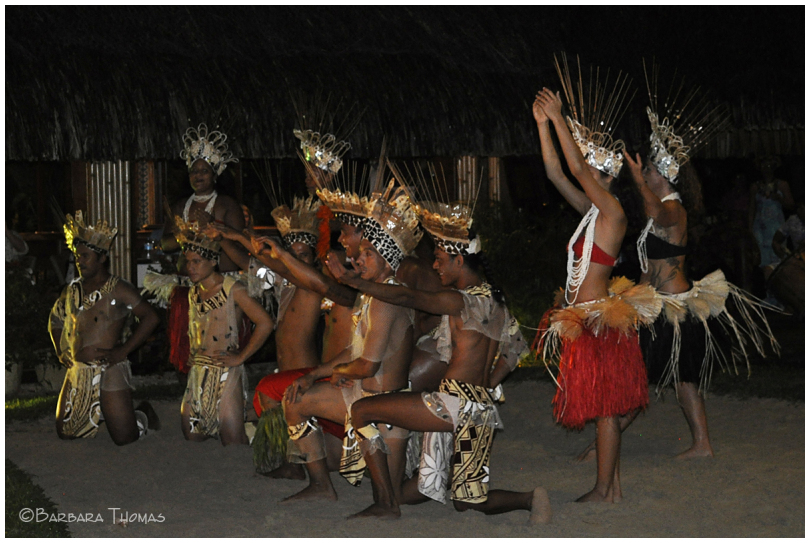 Posted by B. Thomas (Arlington, Texas, United States) on 31 January 2019 in Lifestyle & Culture.

These dances were considered so sensuous, that they were banned by the missionaries in the 1800's! The restrictions by the French Administration were only removed in 1908. Tourism has now helped Tahiti culture revive its Polynesian dancing.

Tahitian Dance moves to the beat of drums, flutes, conch shells and ukuleles. The music styles that Polynesians dance to varies. They express everything from relaxing island-style to intense warrior sounds.

**In January, 2013 I got to go on my bucket list dream trip to the French Polynesian Islands of Tahiti, Moorea, and Bora Bora. Some photos were posted here on Aminus3 at that time, but there are so many more that I never got to. I will revisit the beautiful island of Bora Bora for this next series.

Beautiful light on these dancers
https://by-marie.fr

Dancers have great costumes. The show was definitely interesting.

A superb capture of the dancers.

wonderful image !!!!! Thank you for the information...Looks lovely !

Fabulous action and I love the costumes

Beautiful capture of the scene .

Great capture of their finale pose! Interesting information about their dancing once banned.

A fine picture of these dancers. It’s good that the dancing has survived the passing years.

I imagine the dances were fun to watch.

I remember when I was in Hawaii and there were Tahitian dancers at the luaus. It was always exciting to watch them. I even took hula dancing for a short time. I really like their head pieces. They are quite exotic looking.

Prudish missionaries have a lot to answer for with the damage they've done to so many cultures. An excellent capture of the dance troupe.

interesting and very nice picture of the dancers

Their costumes and head gear esp. are very nice.