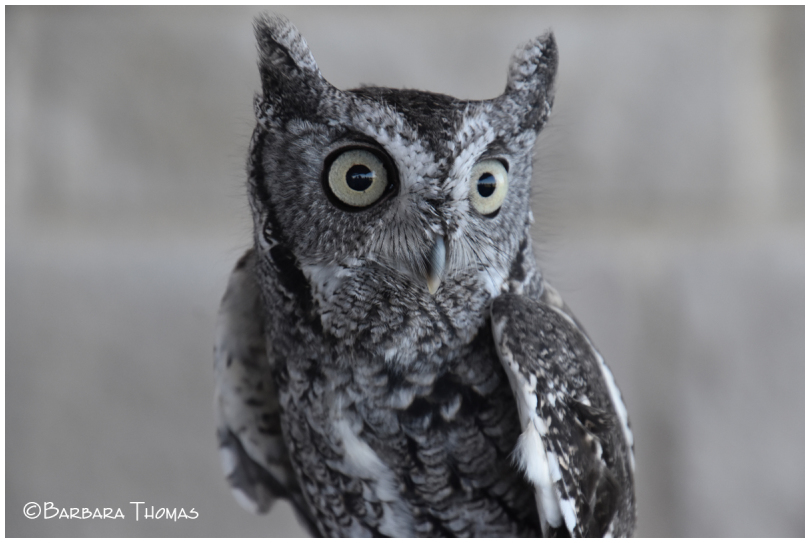 Posted by B. Thomas (Arlington, Texas, United States) on 1 January 2020 in Animal & Insect.

Named after the tallgrass prairie that once covered more than 23,500 square miles of Texas from the Red River to San Antonio, Blackland Prairie Raptor Center is a rehabilitation and conservation education organization, specializing in fostering better public understanding of the relationship between birds of prey and healthy ecosystems.

SweetPea’ – Eastern Screech Owl (Gray-phase)
SweetPea hatched in the spring of 2003, was found by a family and taken home. She was kept in a rabbit cage and fed hamburger meat. The family realized it was illegal to have her and took her to the appropriate authorities. She was found to be in good condition, but as an ‘imprint’ she was non-releasable and transferred to BPRC in August 2004 as an education ambassador. In Texas we have gray and red phases of Screech Owls. She is a gray-phased owl.

Such a beautiful bird. Thank you for telling her story.
Happy New Year!

Magnificent capture Barbara, I love this bird! happy new year for you and your familly and Jasper and Rocket.
https://by-marie.fr

Gorgeous bird. Good thing it got the proper treatment.

A superb capture. Have a wonderful New Year.

My Granny what big eyes you have. Lovely bird. Happy New Year to you

Happy New Year, Barbara. Yes, we need birds of prey, but I do wish they didn't feast on the birds at my feeder!

A very effective close up of this great face. He has lots of personality.

She looks wonderful !!
And thank you for all that info on her. Lovely capture :))))

that is a sad story but a fine image

She is gorgeous! I love those eyes! Happy New Year Barbara! Best wishes for a happy and healthy 2020!

Great portrait .
I wish you a happy - healthy and photogenic 2020 .

Beautiful Portrait of this bird.
Happy New Year to you and yours. :)

it looks a lot like my persian cat, jane

This makes me smile.