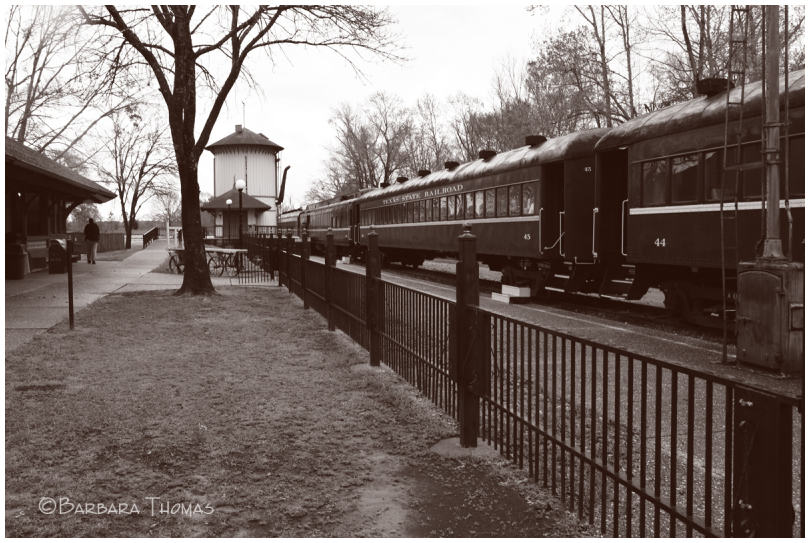 Posted by B. Thomas (Arlington, Texas, United States) on 22 February 2020 in Transportation.

Texas State Railroad - The start of the railroad dates back to 1883, with the completion of the Rusk Penitentiary in Rusk, Tx. Built with inmate labor, the original purpose of the railroad was to transport raw materials for the iron smelter located at the Rusk Penitentiary. In 1906, the line reached Maydelle, and by 1909, the line was completed when it reached Palestine. The railroad grew and eventually expanded to freight and passenger service, but it was not profitable. Regular train service by the state ceased in 1921, and the line was leased to various railroad companies until 1969.

Very nice framing and sepia process. I like!
https://by-marie.fr

Superb composition with the train.

A very nice result with this image .

Love the point of view

@Rose: Hi Rose. Thanks for the recommendation of the book Reservoir Cats. I just got it for my Kindle. I didn't realize it is about a Somali cat! I have a Kindle book and a paperback I'm reading right now and two more loans from a friend, but I will get too it soon. Thanks again.

Beautiful in these sepia colors.

A fine picture and interesting history.

Damage. Without the man on the left, you would have thought we were in 1900.

I hope you enjoy it...if I could have loaned it to you I would have. I had forgotten it was about a somalia cat till I looked it up again. It is a short, easy read.

@Rose: Thanks. It was just $1.49. It does look like a short easy read, and from the first few pages I read it looks cute. I can only imagine if one of my Somali cats wrote a journal. ;-))

It is hard to believe that it was built over a century ago. This image certainly emphasizes how old this train line is. Fabulous narrative history.

Beautiful view of the old railroad and interesting history. Superb. :)

Great photo. Works well in monochrome. Strong leading lines. I like the inclusion of part of the station.